Do not mistreat an alien or oppress him, for you were aliens … 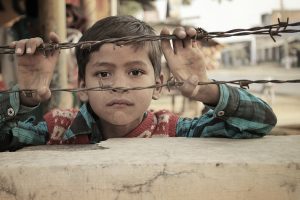 Seriously.  SWAT teams from Border Patrol operating inside the U.S. – far from any border.  That’s from msn.com news.

Do not mistreat an alien or oppress him, for you were aliens …

If you don’t recognize that line, here it is in context.  It’s part of a passage the NIV calls, appropriately enough, Social Responsibility.

Ex 22:21 “Do not mistreat an alien or oppress him, for you were aliens in Egypt.

OK – most of you aren’t in the U.S. as immigrants from Egypt.  But that’s not what this is about anyway.  It refers to, as the book is called, The Exodus.  It’s about God rescuing His people.  And in case you’ve forgotten, Jesus was Jewish.  Jesus was a descendant of the very people this verse specifically applies to.

As for today, except for what we call Native Americans in an attempt to be politically correct, our ancestors came from another country.  Our ancestors were aliens in this place.

Some, maybe even many, of you will say that’s irrelevant.  It’s “our” country now.  Here’s another question.  How many of those Native Americans think we should be sent back to the countries from which our ancestors came?

True – we have the power to enforce what our President wants to do.  But remember – he does work for us.  It’s not the other way around.

And for all the Christians supporting this man, how do you think God views Trump’s treatment of aliens?  It’s hard to imagine God doesn’t consider it mistreatment and oppression.

After all, we’re talking elite agents, snipers, officers that are trained more like the military – going after people who have done nothing wrong other than being in the wrong place at the wrong time.  Isn’t that mistreating aliens?

Your ancestors probably would have willingly accepted them.  Back when America was probably much greater than it is now.  But we don’t do that anymore.

Tell me.  What are we afraid of?  Do we not think God can protect us?  Do we think Trump is greater than God?  Have we lost our sense of what oppressing aliens even means?  Or do we just not really care about God anymore?

Ex 22:22 “Do not take advantage of a widow or an orphan. 23 If you do and they cry out to me, I will certainly hear their cry. 24 My anger will be aroused, and I will kill you with the sword; your wives will become widows and your children fatherless.

This one’s not good news for Trump fans either.  Way too often, these are the very people most affected by some of the stuff he does.  Like balancing the budget to pay for the tax cuts for the ultra-rich.

This isn’t even “just” about mistreating aliens.  This is about oppressing people that are as white as our president.  They’re just not rich enough to matter.  To Trump.  Or to many of his supporters, including the Christian ones.

But then, maybe we just don’t care about God’s anger being aroused anymore?

Ex 22:25 “If you lend money to one of my people among you who is needy, do not be like a moneylender; charge him no interest. 26 If you take your neighbor’s cloak as a pledge, return it to him by sunset, 27 because his cloak is the only covering he has for his body. What else will he sleep in? When he cries out to me, I will hear, for I am compassionate.

We should worry about this, as Christians.  When he cries out to me, I will hear, for I am compassionate.  God knows when we treat people badly.  And He’s compassionate towards them.  But how does He feel about us when we mistreat His aliens in “our” land?

Or do we just not care anymore?

Ex 22:28 “Do not blaspheme God or curse the ruler of your people.

No, I’m really not blaspheming Trump.  But I am concerned about blaspheming against God, the Holy Spirit, by not even questioning when “we the people” ignore those of God’s people who are in the greatest need.

But then, maybe we really don’t care about that either.   Mistreating aliens and oppressing aliens is just part of what we do here in this country these days.

No one can serve two masters

Which leads us to what Jesus said.  No one can serve two masters.  Remember where that came from?

Mt 6:19 “Do not store up for yourselves treasures on earth, where moth and rust destroy, and where thieves break in and steal. 20 But store up for yourselves treasures in heaven, where moth and rust do not destroy, and where thieves do not break in and steal. 21 For where your treasure is, there your heart will be also.

Is your heart dead-set on mistreating aliens?  Maybe I should rephrase that – are you so hard-hearted that you see nothing wrong with oppressing aliens?

Therefore, the question becomes – do you love Trump or Jesus?

Remember something Jesus said right after the very famous John 3:16.  It’s not as famous.  Maybe you’ve never even read it.  But here it is:

John 3:19 This is the verdict: Light has come into the world, but men loved darkness instead of light because their deeds were evil.

Do you not believe the passage from Exodus commanding us to not mistreat aliens?  Or do you think oppressing aliens isn’t evil?  There’s a decision to be made there.  It’s like day and night.  Light and dark.  Good and evil.

Mt 6:24 “No one can serve two masters. Either he will hate the one and love the other, or he will be devoted to the one and despise the other. You cannot serve both God and Money.”

So, the final question for Christian Trump supporters.

Who is your master?  Trump?  Or Jesus?

Home » Is this right? » is this Christian? » Do not mistreat an alien or oppress him, for you were aliens …
a