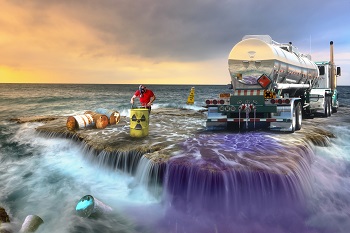 I have to ask those question.  Especially of those of you who claim to be Christian, but put a stake in the ground when it comes to not voting for someone who supports abortion and / or gay rights.  Are either of those issues really that much of a litmus test for you that you’ll vote for someone who supports an issue like this one, refusing to do something about toxic chemicals in drinking water?  An issue that literally puts millions of people at risk of poisoning or death from polluted drinking water?

The article starts off with:

The Trump administration will not set a drinking water limit for two toxic chemicals that are contaminating millions of Americans’ tap water, two sources familiar with the forthcoming decision told POLITICO.

EPA’s decision means the chemicals will remain unregulated under the Safe Drinking Water Act, according to sources familiar with a still-unreleased draft plan that acting administrator Andrew Wheeler signed off on in late December. That means utilities will face no federal requirements for testing for and removing the chemicals from drinking water supplies, although several states have pursued or are pursuing their own limits.

If you’re a Christian, you should remember these words from Genesis:

Ge 2:1 Thus the heavens and the earth were completed in all their vast array.

In other words, when God was finished, and before the Fall, everything here on this earth was very good.  In fact, it was perfect.  As I said – if you’re a Christian, you should know this.  You should also believe it.  Oh yeah – that included perfectly clean and safe drinking water.  And no toxic chemicals.  Anywhere.

Of course, you’re also aware of the Fall.  You know – when Adam and Eve chose to ignore God’s warning about eating from the Tree of the knowledge of good and evil.  And then everything, so to speak, went to Hell.

As Paul wrote though:

Ro 8:22 We know that the whole creation has been groaning as in the pains of childbirth right up to the present time. 23 Not only so, but we ourselves, who have the firstfruits of the Spirit, groan inwardly as we wait eagerly for our adoption as sons, the redemption of our bodies. 24 For in this hope we were saved. But hope that is seen is no hope at all. Who hopes for what he already has? 25 But if we hope for what we do not yet have, we wait for it patiently.

Toxic chemicals in drinking water – it’s not my fault?

Here are more questions for you.  Especially if you claim to be Christian.

After Paul says that all of creation has been affected by the Fall, does that mean we’re relieved of the responsibility God gave to Adam and Eve to take care of His creation?

And what about those millions of people?  The ones who will be drinking that water polluted with toxic chemicals?  Remember when Jesus said this:

Mt 5:43 “You have heard that it was said, ‘Love your neighbor and hate your enemy.’ 44 But I tell you: Love your enemies and pray for those who persecute you, 45 that you may be sons of your Father in heaven. He causes his sun to rise on the evil and the good, and sends rain on the righteous and the unrighteous. 46 If you love those who love you, what reward will you get? Are not even the tax collectors doing that? 47 And if you greet only your brothers, what are you doing more than others? Do not even pagans do that? 48 Be perfect, therefore, as your heavenly Father is perfect.”

Even if you can convince yourself that somehow God didn’t really mean for us to take care of the planet we live on, there’s just no way a Christian can get past what Jesus said above.  We’re even supposed to love people that are our worst enemies.  So what does that say about people who don’t even know who we are?  Certainly, they aren’t our enemy.

Yes – abortion kills.  One person at a time, it kills.

But you know what?  Think about that drinking water with the toxic chemicals in it.  That poison kills too.  And forget about the reality that it can kill on a bigger scale.

The Prayer of Faith

Jas 5:13 Is any one of you in trouble? He should pray. Is anyone happy? Let him sing songs of praise. 14 Is any one of you sick? He should call the elders of the church to pray over him and anoint him with oil in the name of the Lord. 15 And the prayer offered in faith will make the sick person well; the Lord will raise him up. If he has sinned, he will be forgiven. 16 Therefore confess your sins to each other and pray for each other so that you may be healed. The prayer of a righteous man is powerful and effective.

James really has a way of making us look at ourselves, doesn’t he?

So here’s my last two questions.  I’m not saying don’t vote.  What I am asking first is – do you really pray about who to vote for?  And I mean a two way prayer, since praying is a two way conversation with God.  And second, no matter who you vote for, do you confess your sin?  The reality is, in this fallen world, when we vote – we’re supporting someone who sins.  We’re putting them in a position of power, where they can affect others with their sins.

We may even be condoning what they do, but that’s between you and God.  It’s not for me to say that.

I said earlier that I asked my last question.  Now, just one more passage to think about.

Ro 14:9 For this very reason, Christ died and returned to life so that he might be the Lord of both the dead and the living. 10 You, then, why do you judge your brother? Or why do you look down on your brother? For we will all stand before God’s judgment seat. 11 It is written:
“ ‘As surely as I live,’ says the Lord,
‘every knee will bow before me;
every tongue will confess to God.’ ” 12 So then, each of us will give an account of himself to God.

Ro 14:13 Therefore let us stop passing judgment on one another. Instead, make up your mind not to put any stumbling block or obstacle in your brother’s way. 14 As one who is in the Lord Jesus, I am fully convinced that no food is unclean in itself. But if anyone regards something as unclean, then for him it is unclean. 15 If your brother is distressed because of what you eat, you are no longer acting in love. Do not by your eating destroy your brother for whom Christ died. 16 Do not allow what you consider good to be spoken of as evil. 17 For the kingdom of God is not a matter of eating and drinking, but of righteousness, peace and joy in the Holy Spirit, 18 because anyone who serves Christ in this way is pleasing to God and approved by men.

You might think I’m passing judgment from what I’ve written so far.  Actually, I’m not.  However, I am trying to get you do do something that, as Christians, we should all do.

Yes, God gave us a mind.  And Jesus is asking – no, telling – us to use it.  And to be mindful of how much God loves us, and of His commandments.

And so, all I’m trying to do is to get you, the readers who are Christians, to consider our duty as followers of Jesus.  To prayerfully consider the issues, as opposed to just blindly going for or against our “hot-button” issue.  Because it’s not our will that should be done, it’s God’s will.