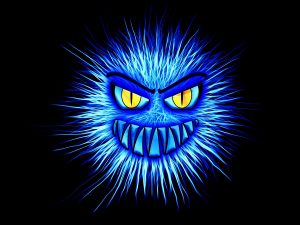 The headline from the Washington Post was: Before pandemic, Trump’s stockpile chief put focus on biodefense. An old client benefited.  But that’s not exactly what we’re going to talk about.  In fact, we’re going to start with Mother Nature.

Do you believe in Mother Nature?

You know “Mother Nature”, right?  The name brings up images of little puppies, kittens, fresh flowers, cute stuff.  At least it does in the spring.  At other times of the year, maybe blizzards, hurricanes, typhoons, massive floods and bad things like that.  Except we tend to call those things Acts of God.

But what about that little guy at the top of the page?  Mother Nature?  An act of God?  How about neither one?  We’ll return to that.  But for now – here’s the excerpt from the article that I want to focus on.  If you don’t believe in the devil, then you probably don’t have any issues with what it says.

“Quite frankly, Mother Nature is not a thinking enemy intent on inflicting grievous harm to our country, killing our citizens, undermining our government or destroying our way of life,” he told Congress in 2011. “Mother Nature doesn’t develop highly virulent organisms that are resistant to our current stockpiles of antibiotics.”

Who or what is Mother Nature?

I don’t really like to use Wikipedia as a source, but for this question – it’s pretty good.  After all, we’re not looking for a technical definition.  Just what people think.

Mother Nature (sometimes known as Mother Earth or the Earth Mother) is a Greco-Roman personification of nature that focuses on the life-giving and nurturing aspects of nature by embodying it, in the form of the mother.

Mother Nature image, 17th century alchemical text, Atalanta Fugiens
The word “nature” comes from the Latin word, “natura”, meaning birth or character (see nature (innate)). In English, its first recorded use (in the sense of the entirety of the phenomena of the world) was in 1266. “Natura” and the personification of Mother Nature were widely popular in the Middle Ages. As a concept, seated between the properly divine and the human, it can be traced to Ancient Greece, though Earth (or “Eorthe” in the Old English period) may have been personified as a goddess. The Norse also had a goddess called Jord (or Erth).

The earliest written usage is in Mycenaean Greek: Ma-ka (transliterated as ma-ga), “Mother Gaia”, written in Linear B syllabic script (13th or 12th century BC).[1] In Greece, the pre-Socratic philosophers had “invented” nature when they abstracted the entirety of phenomena of the world as singular: physis, and this was inherited by Aristotle. Later medieval Christian thinkers did not see nature as inclusive of everything, but thought that she had been created by God; her place lay on earth, below the unchanging heavens and moon. Nature lay somewhere in the center, with agents above her (angels), and below her (demons and hell). For the medieval mind she was only a personification, not a goddess.

Aion, Gaia and four children
In Greek mythology, Persephone, daughter of Demeter (goddess of the harvest), was abducted by Hades (god of the dead), and taken to the underworld as his queen. Demeter was so distraught that no crops would grow and the “entire human race [would] have perished of cruel, biting hunger if Zeus had not been concerned” (Larousse 152). Zeus forced Hades to return Persephone to her mother, but while in the underworld, Persephone had eaten pomegranate seeds, the food of the dead and thus, she must spend part of each year with Hades in the underworld. Demeter’s grief for her daughter in the realm of the dead, is reflected in the barren winter months and her joy when Persephone returns is reflected in the bountiful summer months.

Is Mother Nature a god?

Not that I believe any of those myths, but there’s something interesting in them.  They all have something to do with gods.

In these days of so many people thinking things are just random chance, then Mother Nature not thinking seems like the choice.

But what I’m really after here – what do you think?  Do you honestly believe that a so-called Mother Nature “thing” exists?  Doesn’t matter if you think she’s a god or just some statistical formula that attempts to come up with random chance probabilities.

Or do you believe bad things happen because God makes them happen?  Since this site is mostly about Christianity, and since about 75% of the country claims to be Christian, I must assume that more than 75% of you disagree.  God does not make bad things happen.

God allows bad things to happen.  It’s a fine line between make and allow – but it’s a huge difference.  That’s because Christians (should) believe bad things happen because Satan has accused us (all people, Christian or not) of something, asks permission of God to do something, and God allows it.  If you need a refresher on how that works, just check out the book of Job in the Bible.

If you don’t believe in the devil

It just means you don’t believe it.

What’s the big deal if you don’t believe in the devil?

If you don’t believe in the devil, then you have a hard time with a lot of things.  Like this one about that blue monster at the top of the page:

Mother Nature doesn’t develop highly virulent organisms that are resistant to our current stockpiles of antibiotics.

No – Since there’s no such thing as Mother Nature, she doesn’t do that.  And since God doesn’t do bad things, neither does He.  But the Devil?  That’s a whole other story.

Of course  the devil  does develop highly virulent organisms that are resistant to our current stockpiles of antibiotics.

But if we don’t believe in the devil, then we’ll never actually be ready for when it happens.

Scientists have identified a new strain of the coronavirus that has become dominant worldwide and appears to be more contagious than the versions that spread in the early days of the COVID-19 pandemic, according to a new study led by scientists at Los Alamos National Laboratory.

The new strain appeared in February in Europe, migrated quickly to the East Coast of the United States and has been the dominant strain across the world since mid-March, the scientists wrote.

In addition to spreading faster, it may make people vulnerable to a second infection after a first bout with the disease, the report warned.

Does the Bible really say the devil is after us?

To Elders and Young Men

1Pe 5:1 To the elders among you, I appeal as a fellow elder, a witness of Christ’s sufferings and one who also will share in the glory to be revealed: 2 Be shepherds of God’s flock that is under your care, serving as overseers—not because you must, but because you are willing, as God wants you to be; not greedy for money, but eager to serve; 3 not lording it over those entrusted to you, but being examples to the flock. 4 And when the Chief Shepherd appears, you will receive the crown of glory that will never fade away.

1Pe 5:5 Young men, in the same way be submissive to those who are older. All of you, clothe yourselves with humility toward one another, because,
“God opposes the proud
but gives grace to the humble.” 6 Humble yourselves, therefore, under God’s mighty hand, that he may lift you up in due time. 7 Cast all your anxiety on him because he cares for you.

1Pe 5:8 Be self-controlled and alert. Your enemy the devil prowls around like a roaring lion looking for someone to devour. 9 Resist him, standing firm in the faith, because you know that your brothers throughout the world are undergoing the same kind of sufferings.

1Pe 5:10 And the God of all grace, who called you to his eternal glory in Christ, after you have suffered a little while, will himself restore you and make you strong, firm and steadfast. 11 To him be the power for ever and ever. Amen.

If you don’t believe in the devil, in spite of what the Bible says …

There are problems with that passage for many of us today.  Probably even most of us.

Be self-controlled and alert.

In an age of incredibly short attention spans, believing whatever the last tweet from our favorite source is, and just plain being closed-minded – self control and alertness are a vague memory from the past.

Your enemy the devil prowls around like a roaring lion looking for someone to devour.

Not literally eat like a real flesh and blood lion would.  No, the devil is after our souls.  And getting more than one person at a time is a great prize for him and his other fallen angels.

Resist him, standing firm in the faith, because you know that your brothers throughout the world are undergoing the same kind of sufferings.

Wow – how hard is this?  We can’t even stay away from the beach or the gym.  And it’s not like we care that much for our brothers and sisters, especially the ones who are more vulnerable to this virus.  It’s more like eat, drink and be merry – those other people are “on their last legs” anyway.  That last part is a quote from a politician here in the U.S.

And then there’s the one from Ebenezer Scrooge.  Better that they die now and reduce the surplus population.

No, all too often, we don’t stand in the faith at all, let alone firmly.  And if we personally aren’t suffering, then nothing else matters.  Apparently not even our older friends, not to mention family members.

Conclusion – if you don’t believe in the devil

If you don’t believe in the devil, then I submit it will be really hard to do something that should be of utmost importance to Christians.  Something Paul wrote in Galatians.

Life by the Spirit

Gal 5:22 But the fruit of the Spirit is love, joy, peace, patience, kindness, goodness, faithfulness, 23 gentleness and self-control. Against such things there is no law. 24 Those who belong to Christ Jesus have crucified the sinful nature with its passions and desires. 25 Since we live by the Spirit, let us keep in step with the Spirit. 26 Let us not become conceited, provoking and envying each other.

If you look at the news on the virus, you can see all sorts of examples where people gratify the desires of the sinful nature while ignoring other people.  Just look at the beaches, the protests and the bars – all those people packed in with no social distancing and no masks.  There’s only one result from that – which we’ll all begin to see in about a week from now.  And a month from now, as this thing just grows and grows.

You can see some, but not as much, when it comes to the fruit of the Spirit:  love, joy, peace, patience, kindness, goodness, faithfulness, 23 gentleness and self-control.  And those words, especially love and joy, have a far different meaning for the average person compared to what the fruit of the Holy Spirit really is.

Image by Gerd Altmann from Pixabay