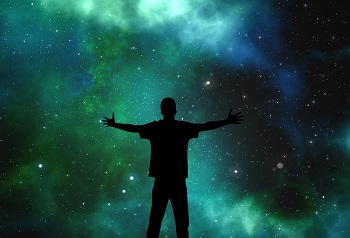 After some assumptions, the article says:

That’s the size of our observable Universe, which contains an estimated two trillion galaxies in various stages of evolutionary development. But beyond that, there ought to be much more Universe beyond the limits of what we can presently see: the unobservable Universe. Thanks to our best measurements of the part we can see, we’re finally figuring out what lies beyond, and how much of it we’ll someday be able to perceive and explore.

Everywhere we look, in all directions, we see a Universe that tells us the same cosmic story. But part of that story is the fact that the farther away we look, the farther we’re looking back in time. The Universe hasn’t been around, forming stars and growing galaxies, forever. According to the Big Bang and the observations that support it, the Universe had a beginning.

So, according to the article, the universe had a beginning.
It’s expanding.
And we know at what rate.
We even know what’s beyond what we can see.

In fact, I don’t believe it.

How Much Of The Unobservable Universe Will We Be Able To See?

Question:  How do we know there wasn’t another big bang someplace in what’s beyond what we can see?
Answer:  We don’t.  There’s just no way we could know that.  It’s part of the unobservable universe.

Question:  How do we know the rate of expansion / movement?
Answer: We don’t.  Scientists disagree on this.  Some things just don’t behave the way they’re supposed to.  Huh?  Make that – some things just don’t move according to our calculations.  The fact that different scientists have different models for expansion / movement within the universe means exactly one thing.  We don’t know.

Question: What was there before the universe began?
Answer:  Nothing?  The Big Bang created all this our of nothing?
Please.  Let’s get real.  Something from nothing?  And it all started by nobody and no thing?  It just “happened”?  If that’s true – why doesn’t it just keep happening?

Are we as smart as we think we are?

Do you know what’s the first reference to wisdom in the Bible?

Ge 3:6 When the woman saw that the fruit of the tree was good for food and pleasing to the eye, and also desirable for gaining wisdom, she took some and ate it. She also gave some to her husband, who was with her, and he ate it. 7 Then the eyes of both of them were opened, and they realized they were naked; so they sewed fig leaves together and made coverings for themselves.

Oh.  That’s comforting, isn’t it?  desirable for gaining wisdom.  Pointed out to us by Satan.  Awesome.  That’s where I’d want to get my wisdom.  Not!  Never.

Remember what else the serpent said, just before Eve ate that fruit?

Ge 3:4 “You will not surely die,” the serpent said to the woman. 5 “For God knows that when you eat of it your eyes will be opened, and you will be like God, knowing good and evil.”

you will be like God.  Yes – we certainly think we’re like God.  Actually, many think they’re either better than God.  Or there is no God.  Even that they are God.

Wait – let me rephrase that a bit.  The serpent wasn’t totally honest.  Surprise. (that was sarcastic.)  Adam and Eve were already “good”.  But they didn’t know it.  It wasn’t until they ate the fruit from the tree of the knowledge of good and evil that they knew evil – and the difference between good and evil.

So really, what we (yes – we, all of us) learned from Adam and Eve eating that fruit which gave “wisdom” is knowledge concerning evil.  It gave us no other knowledge at all.

In fact, it actually made us less likely to know a lot of things, because that knowledge of evil included things like pride and arrogance.  We got the ability to think we’re a whole lot “smarter” than we really are.

The wisdom of Job

The Book of Job is good for learning so many things.  There’s even a book called The Gospel According to Job, by Mike Mason.  I highly recommend it.  Anyway, here’s just one of the things about wisdom from Job.

Job 28:20 “Where then does wisdom come from?
Where does understanding dwell?

Job 28:21 It is hidden from the eyes of every living thing,
concealed even from the birds of the air.

Job 28:22 Destruction and Death say,
‘Only a rumor of it has reached our ears.’

Job 28:23 God understands the way to it
and he alone knows where it dwells,

Job 28:24 for he views the ends of the earth
and sees everything under the heavens.

Just look at what’s in there.

Job asks where wisdom comes from.  Where then does wisdom come from?
And concludes it’s hidden.

Job then says only God knows where wisdom is.  God understands the way to it and he alone knows where it dwells
And later says that we know nothing, but God knows all.

Finally, Job says that the reason God knows about wisdom is because He sees everything.
for he views the ends of the earth
and sees everything under the heavens.

We think we know what’s beyond the earth and the heavens – the universe.
But we don’t really even know that much about our own earth, let alone the universe.
And forget about trying to say we know anything about Heaven.

Towards the end, God finally talks to Job.  Not to answer.  Not to give knowledge.  But for this:

Job 38:1 Then the LORD answered Job out of the storm. He said:

Job 38:2 “Who is this that darkens my counsel
with words without knowledge?

Job 38:3 Brace yourself like a man;
I will question you,
and you shall answer me.

Job 38:4 “Where were you when I laid the earth’s foundation?
Tell me, if you understand.

Job 38:5 Who marked off its dimensions? Surely you know!
Who stretched a measuring line across it?

Job 38:6 On what were its footings set,
or who laid its cornerstone—

Job 38:7 while the morning stars sang together
and all the angels shouted for joy?

I can just imagine what God thinks when we do things like claim to know so much about His universe.  And when we ask how much more will we be able to see – when we get better technology that we developed.

Who is this that darkens my counsel
with words without knowledge?

Where were you when I laid the earth’s foundation?
Tell me, if you understand.

Imagine – thinking we can actually tell God how it was done!  Then we’d hear:

Brace yourself like a man;
I will question you,
and you shall answer me.

Good luck with that one.

Here’s something on wisdom from the wisest man who ever lived.  Not counting Jesus, of course, since He’s the Son of God.  That wouldn’t be a fair comparison.  This is from Solomon.  aka Qoheleth, the teacher.

Ecc 7:23 All this I tested by wisdom and I said,
“I am determined to be wise”—
but this was beyond me.

Ecc 7:24 Whatever wisdom may be,
it is far off and most profound—
who can discover it?

Ecc 7:25 So I turned my mind to understand,
to investigate and to search out wisdom and the scheme of things
and to understand the stupidity of wickedness
and the madness of folly.

Wisdom was beyond him.  As with Job, he says – who can discover it?

to understand the stupidity of wickedness
and the madness of folly

Like trying to tell God how He created His universe?  That’s certainly folly.  And yes, it’s also evil.

How Much Of The Unobservable Universe Will We Be Able To See?

What if there was the opportunity to see as much as you want?

That would take forever.  Literally.

It used to be the most popular “sports” verse.  You’d see it everywhere.  But that’s before Philippians 4:13 – was totally misappropriated.

Jn 3:16 “For God so loved the world that he gave his one and only Son, that whoever believes in him shall not perish but have eternal life.”

Yes – eternal life.  That’s a really long time to learn a whole lot of things.  From the Master.  From the one who Really Knows.  Not from someone who guesses and claims knowledge.  But from The One with Real Knowledge.

And the verses after John 3:16 tell us how to get started.

Jn 3:16 “For God so loved the world that he gave his one and only Son, that whoever believes in him shall not perish but have eternal life. 17 For God did not send his Son into the world to condemn the world, but to save the world through him. 18 Whoever believes in him is not condemned, but whoever does not believe stands condemned already because he has not believed in the name of God’s one and only Son. 19 This is the verdict: Light has come into the world, but men loved darkness instead of light because their deeds were evil. 20 Everyone who does evil hates the light, and will not come into the light for fear that his deeds will be exposed. 21 But whoever lives by the truth comes into the light, so that it may be seen plainly that what he has done has been done through God.”

How’s that for an offer?  It’s open to all.  You included.

Don’t let pride and arrogance get in the way.  Sure – study.  Sure – learn.  But just as sure – realize that what we know is a drop in the bucket.  A really, really huge bucket.  And a tiny, tiny drop.

But even that little drop is enough to show us just how awesome God is.

And it should be enough for us to want to learn more.  And more.  And still more.

Hope to see you there!

Image by geralt on Pixabay