The Discovery That Could Have Predicted Why the Universe Exists is the headline.  The first comment at the time I read the article: Could there be an optical/mental illusion that we might be missing from these experiments? 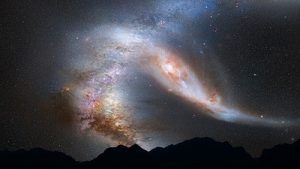 That comment is, accidentally or otherwise, right on target.

But before we go there, let’s see what’s behind the headline from dailygalaxy.com.

“The Standard Model as it stands cannot possibly be right because it cannot predict why the universe exists,” said Gerald Gabrielse, the Board of Trustees Professor of Physics at Northwestern University.

Why the Universe Exists.  Or does it really not exist?

Oh.  So the Standard Model cannot possibly be right. Are we sure that the universe really does exist?  We’ll get into why in a bit.  But first, let’s look at something from CERN –

Developed in the early 1970s, it has successfully explained almost all experimental results and precisely predicted a wide variety of phenomena. Over time and through many experiments, the Standard Model has become established as a well-tested physics theory.

That sounds more than a little different than the dailygalaxy.com article.  Like 180 degrees different.  Like they can’t both be correct different.

BTW – if you don’t know, CERN is the European Organization for Nuclear Research. The name CERN is derived from the acronym for the French Conseil Européen pour la Recherche Nucléaire, a provisional body founded in 1952 with the mandate of establishing a world-class fundamental physics research organization in Europe.

Also, if you’re not familiar with the Standard Model of the universe, here’s a really simple explanation:

The Standard Model of particle physics is the theory describing three of the four known fundamental forces (the electromagnetic, weak, and strong interactions, and not including the gravitational force) in the Universe, as well as classifying all known elementary particles.

Back to the differences.  However, CERN goes on to say –

So far so good, but……it is not time for physicists to call it a day just yet. Even though the Standard Model is currently the best description there is of the subatomic world, it does not explain the complete picture. The theory incorporates only three out of the four fundamental forces, omitting gravity. There are also important questions that it does not answer, such as “What is dark matter?”, or “What happened to the antimatter after the big bang?”, “Why are there three generations of quarks and leptons with such a different mass scale?” and more. Last but not least is a particle called the Higgs boson, an essential component of the Standard Model.

So even CERN says there are issues with the Standard Model.

But what is the Standard Model really about?  In simple English?  Originally, it was supposed to describe how the Universe came to exist.  There was the Big Bang.  Since then, we’ve learned a whole lot.  There are more and more details added all the time.

But it never was complete.  Gravity was never considered.  And as we learned more, as with dark matter, there are more unanswered questions.  And that’s fine.  It was supposed to start with what science considered to be the beginning.  Like when the Big Bang happened.

However, there’s still another question that can’t be answered by all of this.  Why does the universe exist?  What caused the Big Bang?  And if not the Big Bang, then what caused whatever scientists come up with as the event that was the beginning of the universe in which we live?

But then the article goes on:

In a new study, researchers at Northwestern, Harvard and Yale universities examined the shape of an electron’s charge with unprecedented precision to confirm that it is perfectly spherical. A slightly squashed charge could have indicated unknown, hard-to-detect heavy particles in the electron’s presence, a discovery that could have upended the global physics community.

“If we had discovered that the shape wasn’t round, that would be the biggest headline in physics for the past several decades,” said Gerald Gabrielse, who led the research at Northwestern. “But our finding is still just as scientifically significant because it strengthens the Standard Model of particle physics and excludes alternative models.”

Here’s what the article says about the alternative theories:

Squashing the alternative theories: The ACME team probed this question by firing a beam of cold thorium-oxide molecules into a chamber the size of a large desk. Researchers then studied the light emitted from the molecules. Twisting light would indicate an electric dipole moment. When the light did not twist, the research team concluded that the electron’s shape was, in fact, round, confirming the Standard Model’s prediction. No evidence of an electric dipole moment means no evidence of those hypothetical heavier particles. If these particles do exist at all, their properties differ from those predicted by theorists.

There are at least two issues with that.

First of all, assuming that the measurements are actually definitive.  When I was in college learning this stuff, terms that are commonplace now didn’t even exist.  Why not?  Because there were no instruments capable of measuring anything close to the scale of the ones used today.  To assume that there will not be any future advances throwing today’s “knowledge” into the heap of outdated information tomorrow seems, well, like forgetting history.

Secondly, the conclusion is that the alternative models need to be revisited.  Considering the headline, it’s hard to believe tht maybe the Standard Model doesn’t also need some revisiting.

And speaking of revisiting …

Harvard and Yale both had Christian roots.  Northwestern was founded by Methodists, including three ministers.  Maybe they should all revisit their own history.

Maybe they would have understood the opening of the Gospel of John.

Jn 1:3 Through him all things were made; without him nothing was made that has been made. 4 In him was life, and that life was the light of men. 5 The light shines in the darkness, but the darkness has not understood it.

First – God existed.  Always existed.  God had no beginning.  But the universe, and our earth, did have a beginning.

Ge 1:1 In the beginning God created the heavens and the earth. 2 Now the earth was formless and empty, darkness was over the surface of the deep, and the Spirit of God was hovering over the waters.

Ge 1:6 And God said, “Let there be an expanse between the waters to separate water from water.” 7 So God made the expanse and separated the water under the expanse from the water above it. And it was so. 8 God called the expanse “sky.” And there was evening, and there was morning—the second day.

And there it is.

If these three universities would only revisit their past, they could understand those words.  And maybe they could have a better understanding of why the universe exists.

However, the fact that they choose not to may very well also be known from the very same verses we just read.

Yes, God does exist in this fallen world, but those who refuse to know God remain in the dark – without the knowledge that they could so easily have.

Christ the Wisdom and Power of God

1Co 1:18 For the message of the cross is foolishness to those who are perishing, but to us who are being saved it is the power of God. 19 For it is written:
“I will destroy the wisdom of the wise;
the intelligence of the intelligent I will frustrate.”

1Co 1:20 Where is the wise man? Where is the scholar? Where is the philosopher of this age? Has not God made foolish the wisdom of the world? 21 For since in the wisdom of God the world through its wisdom did not know him, God was pleased through the foolishness of what was preached to save those who believe. 22 Jews demand miraculous signs and Greeks look for wisdom, 23 but we preach Christ crucified: a stumbling block to Jews and foolishness to Gentiles, 24 but to those whom God has called, both Jews and Greeks, Christ the power of God and the wisdom of God. 25 For the foolishness of God is wiser than man’s wisdom, and the weakness of God is stronger than man’s strength.

Yes, there was a time when every student at all three universities would have understood those verses as well.

It’s really sad.  For me, I can’t wait to learn from The Creator.  But so many people would rather learn what little they can here in this life – deny God, in spite of the incredibly overwhelming evidence for His existence – and then learn no more.

If the perceived discrepancies between science and The Bible are of interest to you, I invite you to also check out my articles from this site and it’s sister, God Versus Religion.

Which god saves? –>  God and science

God versus religion –>  Science versus God and The Bible