Chinese authorities destroy two Marian shrines.  Some are probably shocked, since the Vatican just signed a mysterious agreement with China related to having the Communist Party in China appoint Bishops of the Catholic Church in that country.  However, if you’ve read China appoints seven Catholic Bishops – did the Pope just sell out underground churches? then you shouldn’t be surprised at all.  If anything, this was to be expected.

BTW – yes, I know – the Bishops are technically appointed by the Pope.  But as a matter of practice and fact – they are nominated by China and the Pope can only appoint someone China nominates.  Therefore, China effectively and actually appoints the Bishops.  Anything else is merely playing with words. 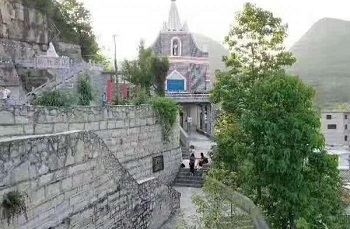 The following is the beginning of an article from The Catholic News Agency:

Beijing, China, Oct 26, 2018 / 02:40 pm (CNA).- As part of an ongoing crackdown on religious practice in the country, Chinese authorities demolished two Catholic Marian shrines this week. The move comes just one month after the Chinese government signed an agreement with the Vatican regarding the appointment of bishops.

According to reports from AsiaNews, government authorities destroyed the Marian shrines of Our Lady of the Seven Sorrows in Dongergou (Shanxi), and Our Lady of Bliss, also known as Our Lady of the Mountain, in Anlong (Guizhou).

From that opening, one might get the idea that it came as a surprise to Catholic leaders.  But when we add the next paragraph, it could go either way.

In the case of China, they are all to happy to get rid of all thought about Jesus being the Son of God.  One way they do that is by demolishing unapproved churches.  Including the buildings.  For more on that, see Chinese religious regulations.  If China allowed unapproved buildings to remain standing, it would make the government look weak.

Building another “approved” church is not a big deal for them.  Labor is cheap.  So the government removes the unapproved building.  At the same time, it also destroys the home for the “unapproved” underground church.  They kill two birds with one stone.  As the question asked in the earlier referenced article about China approving Catholic Bishops – did the Pope sell out the underground church in China?  So far – it sure looks like it.

But before we lose all hope, remember what I said about killing two birds with one stone.  It wasn’t intended, but as soon as I typed that, I thought of this passage:

Mt 10:26 “So do not be afraid of them. There is nothing concealed that will not be disclosed, or hidden that will not be made known. 27 What I tell you in the dark, speak in the daylight; what is whispered in your ear, proclaim from the roofs. 28 Do not be afraid of those who kill the body but cannot kill the soul. Rather, be afraid of the One who can destroy both soul and body in hell. 29 Are not two sparrows sold for a penny ? Yet not one of them will fall to the ground apart from the will of your Father. 30 And even the very hairs of your head are all numbered. 31 So don’t be afraid; you are worth more than many sparrows.

True – we’re not talking literal birds here.  We’re talking buildings.  But honestly, isn’t a building worth less than two sparrows?  Maybe not to us, in monetary terms.  But what about to God?  A building, even a church building, is something man-made.  A sparrow is God-created.  So if we are worth so much more to God than a sparrow – how much more are we worth compared to a building?

Today, we also tend to think of a church as being a building.  But really, a church is a group of people.

1577 ἐκκλησία [ekklesia /ek·klay·see·ah/] n f. From a compound of 1537 and a derivative of 2564; TDNT 3:501; TDNTA 394; GK 1711; 118 occurrences; AV translates as “church” 115 times, and “assembly” three times. 1 a gathering of citizens called out from their homes into some public place, an assembly. 1A an assembly of the people convened at the public place of the council for the purpose of deliberating. 1B the assembly of the Israelites. 1C any gathering or throng of men assembled by chance, tumultuously. 1D in a Christian sense. 1D1 an assembly of Christians gathered for worship in a religious meeting. 1D2 a company of Christian, or of those who, hoping for eternal salvation through Jesus Christ, observe their own religious rites, hold their own religious meetings, and manage their own affairs, according to regulations prescribed for the body for order’s sake. 1D3 those who anywhere, in a city, village, constitute such a company and are united into one body. 1D4 the whole body of Christians scattered throughout the earth. 1D5 the assembly of faithful Christians already dead and received into heaven.  [1]Strong, J. (1995). Enhanced Strong’s Lexicon. Woodside Bible Fellowship.

The definition, from the early church period, is fascinating.  According to 1D2 – the official Chinese Catholic Church isn’t even a “church”, in the Christian sense of the word.

The Christian church isn’t the building.  In the Christian sense, a church isn’t just any group of people.  It’s a group of Christian(s), or of those who, hoping for eternal salvation through Jesus Christ, observe their own religious rites, hold their own religious meetings, and manage their own affairs, according to regulations prescribed for the body for order’s sake.  As we saw earlier – if Jesus isn’t the Son of God, then there’s no Christianity.  Therefore, in the eyes of God, the official Chinese Catholic Church isn’t a church.  It’s just a bunch of people meeting in a building.

As we saw, the buildings aren’t worth much to God.  Maybe even nothing.

It’s bad enough that the government in China is part of killing the souls of their people.  It’s worse that some who should know better – who are in a position of trust when it comes to knowing God – take part in leading astray anyone who wanted to know God.

It’s all reminiscent of something from the book of Acts.

The Riot in Ephesus

Ac 19:23 About that time there arose a great disturbance about the Way. 24 A silversmith named Demetrius, who made silver shrines of Artemis, brought in no little business for the craftsmen. 25 He called them together, along with the workmen in related trades, and said: “Men, you know we receive a good income from this business. 26 And you see and hear how this fellow Paul has convinced and led astray large numbers of people here in Ephesus and in practically the whole province of Asia. He says that man-made gods are no gods at all. 27 There is danger not only that our trade will lose its good name, but also that the temple of the great goddess Artemis will be discredited, and the goddess herself, who is worshiped throughout the province of Asia and the world, will be robbed of her divine majesty.”

Ac 19:28 When they heard this, they were furious and began shouting: “Great is Artemis of the Ephesians!” 29 Soon the whole city was in an uproar. The people seized Gaius and Aristarchus, Paul’s traveling companions from Macedonia, and rushed as one man into the theater. 30 Paul wanted to appear before the crowd, but the disciples would not let him. 31 Even some of the officials of the province, friends of Paul, sent him a message begging him not to venture into the theater.

Ac 19:32 The assembly was in confusion: Some were shouting one thing, some another. Most of the people did not even know why they were there. 33 The Jews pushed Alexander to the front, and some of the crowd shouted instructions to him. He motioned for silence in order to make a defense before the people. 34 But when they realized he was a Jew, they all shouted in unison for about two hours: “Great is Artemis of the Ephesians!”

Ac 19:35 The city clerk quieted the crowd and said: “Men of Ephesus, doesn’t all the world know that the city of Ephesus is the guardian of the temple of the great Artemis and of her image, which fell from heaven? 36 Therefore, since these facts are undeniable, you ought to be quiet and not do anything rash. 37 You have brought these men here, though they have neither robbed temples nor blasphemed our goddess. 38 If, then, Demetrius and his fellow craftsmen have a grievance against anybody, the courts are open and there are proconsuls. They can press charges. 39 If there is anything further you want to bring up, it must be settled in a legal assembly. 40 As it is, we are in danger of being charged with rioting because of today’s events. In that case we would not be able to account for this commotion, since there is no reason for it.” 41 After he had said this, he dismissed the assembly.

It’s like the blind leading the blind.  And no one wants to listen to those who actually can see.  Confusion reigns.  And souls are lost.  So sad.

Links to YouTube videos of the destruction were published by AsiaNews:

Our Lady of Bliss

Our Lady of Seven Sorrows

Regarding the mysterious and undisclosed agreement between the Vatican and China, the article says this:

The agreement was intended to regularize the situation of the Church in China, moving towards a unification between the underground and state-sponsored branches. The Vatican-China deal, which Rome termed “pastoral” rather than “diplomatic” has been roundly criticized by human rights groups and some Church leaders, including Cardinal Joseph Zen.

Zen, the former bishop of Hong Kong wrote in a column for the New York Times this week that the agreement was a step toward the “annihilation” of the Catholic Church in China.

Sadly, it closes with this statement:

While Cardinal Zen condemned the violations of religious freedom in his opinion piece this week, he warned clergy of the underground church against starting a “revolution.”

“They take away your churches? You can no longer officiate? Go home, and pray with your family. Till the soil. Wait for better times. Go back to the catacombs. Communism isn’t eternal.”

Can you even imagine Paul or any of the Saints from the early church telling people to Wait for better times because the Roman Empire isn’t eternal?

As one final example of hope, please see The more you tighten your grip, Satan ….  Yes, it’s a take on the line from Star Wars.  But it’s about the fine line between someone being down and out – versus down and looking for help / hope.  And the harder the government tries to shut down Christianity, the more people are down and out looking for hope.