Would you go to church in a boat?  I recently read a headline that made me ask this question of myself.  Now, I wonder how others might answer.  It’s happening right now.  The deadline I read was: Two secret churches in {country name to follow} show how powerful the Bible really is. 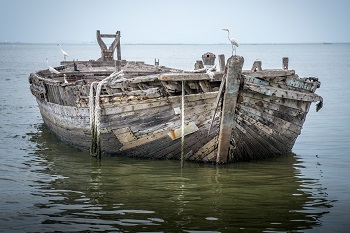 The article starts off with this:

In the early morning light, a small group of{country name to follow} believers meets on the riverbank, lugging their fishing gear with them.

Quietly, they load into a small boat and push off from land. It’s not until they’re far into the middle of the river that they … to dig through their gear and pull out their Bibles.

Would you do this?  Would you go to church in that boat pictured on the right?  It’s old.  Looks dangerous.  And yet, it’s probably very much like what the people mentioned above are using.

church in a boat – taking the Bible too literally?

I left out some information on purpose.  The article does say where this church in a boat phenomena is taking place.  I’ll tell you soon.  But I did include the part that says these are secret churches.  So – are they being so secretive because they’re afraid someone will think they’re weird for taking the Bible too literally?

In case you’re not sure what I’m talking about, remember this scene:

The Calling of the First Disciples

Mt 4:18 As Jesus was walking beside the Sea of Galilee, he saw two brothers, Simon called Peter and his brother Andrew. They were casting a net into the lake, for they were fishermen. 19 “Come, follow me,” Jesus said, “and I will make you fishers of men.” 20 At once they left their nets and followed him.

Mt 4:21 Going on from there, he saw two other brothers, James son of Zebedee and his brother John. They were in a boat with their father Zebedee, preparing their nets. Jesus called them, 22 and immediately they left the boat and their father and followed him.

Maybe these folks had some strange idea that it might be good to more closely follow what Jesus did?  Like fishing should be done in a boat – so even though they’re fishing for men, they should do it in a boat?  And they don’t want to be ridiculed – so they keep their church a secret?

Or maybe it’s some kind of cult?  They only do church in a boat.

church in a boat – out of necessity

No – it’s none of those things.

These people are doing church in a boat for their safety.  Yes, they are Christians.  Their church is secret, because Christianity is illegal in their country.  Christians end up lost in prison or dead.  Small fishing boats – with visibility of what’s happening 360 degrees around them – are the only place they feel safe.

This is the only place where they feel safe enough to worship together and study God’s Word. And even then, they are constantly on alert.

Even then, inviting someone new into their secret church is full of danger.  They could very possibly end up inviting a government agent into their church.

f they are caught reading the Bible, they could immediately be sentenced to 15 years in a labor camp – or worse. They’ve heard the stories of what happens to people who are heard speaking the name of Jesus. Many of them have family members and friends who are living in the camps now … or have been buried there.

And yet – they do it.  They go to church in a boat.  They invite new people.  And they go through all of this to know God better.  In spite of the risk.

church in a boat – in North Korea

For us in the U.S., going to a Christian church isn’t illegal.  Not yet anyway.  The same is true in most other countries.  However, there are a whole lot of places in the world where it is illegal.  Where the penalty could be death.

So now I ask you the question – would you do church in a boat?

No – I don’t mean church on a cruise ship.  Don’t laugh – I actually went to a church where the richest people in the church really did church “retreats” on a cruise ship.  That’s a far cry from what Jesus and the first disciples.

But seriously. What if you were in a place where Christianity was illegal. And the only real Christian churches met in boats.  (By “real” Christian churches, I mean one that follows the Bible, not one like China’s Three Self Patriotic Movement Church, which is supposedly Christian – but is really a mouthpiece of the communist party in China.)

Would you be a part of that church in a boat?